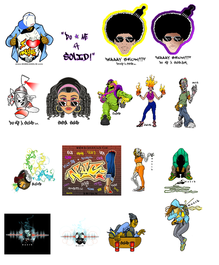 Do Me A Solid, Inc. (DMAS) is an interactive T-shirt design company which presents Hip Hop Graffiti Fashions that allow you the consumer, to creatively design your own distinctive Tees. DMAS is the brainchild of Jon “Solid” Valinotti and along with co-founder Courtney Barrett-Bryan are spearheading the company's growth.  Jon SOLID has been an established graffiti artist for over 25 years.  He is the former Marketing Director of ck Calvin Klein Jeanswear, FUBU Ladies the Collection and Basketball City. The concept behind Do Me A Solid is based upon the old adage of doing someone a “solid” (a favor).  So in keeping with doing someone a solid, DMS intends to “look out” (care for) all of our DMAS friends & family by presenting authentic NYC hip-hop graffiti t-shirt designs that promote a sense of empowerment and inspiration. In the future our www.domeasolid.com website will allow you to add your own personal touch to make the shirt you purchase truly your own.  With the click of a button you can create designs that express your own imagination, individuality and freedom of expression. You can access our shop by visiting it @ http://solidshop.spreadshirt.com/

Cat Rhodes and The Truth 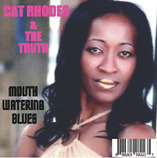 For the last three years Catherine Rhodes, affectionately AKA as “Cat,” has toured as a guest artist with world renowned Louisiana Blues Hall of Famer and 7 times Grammy nominated musician Kenny Neal, in Paris, Germany as well as other artist in the southeast region of the United States. Attached is link to YouTube video of performance on the Legendary R & B Cruise http://youtu.be/LNJxMFEzlfE. Adding to her resume, she also was a Radio Personality for WLVV Spanish Fort Alabama and secured Leading roles in the #1 Hit Gospel Stage Play, A Good Man Is Hard to Find and Ain't No Woman Like the One I Got, written by the Late David Payton.

Catherine continues to perform everywhere she can and to this end, in 2013 she formed her own band, The Truth with Grammy nominated drummer Bryan Morris as director. The band does covers of jazz, blues, Motown and originals and put out its first mini CD titled Mouth Watering Blues, which is available from www.cdbaby.com. Next up is a full album of a variety of genres slated for later on this year. Further showcasing her photographic presence is this link to the video of her original composition I Like, http://youtu.be/46FTj-Lyy9E. In particular, Catherine and Bryan are deeply honored and proud to be new members in the Blues Society of Northwest Florida in Pensacola.

During the early part of her career, she traveled extensively in Europe where she performed with the group Natural Sweetness on the Seven/7 Concert Tour, which began in Mannheim, Germany. Was also opening act for Bryan McKnight, Pebo Bryson and Joan Faulkner, of West Germany. The group started as back-up singers for award-winning R & B artist Jimmie “Bo” Horne. During this period Catherine did Runway and Photo Model for the German Based Company Veronique’s Model Team of Frankfurt Germany. Other noteworthy mentions are performances with Clarence Carter, Jerry “Ice Man” Butler, TheReggae Festival @ the Amphitheater in Louisiana and home coming celebration for BB King.

Catherine has been singing since childhood starting out with her mother’s gospel group, “The Melotones”. Growing up in a large family and the second to last of twelve children presented Catherine with a built in audience in front of which to perform. This she excelled in and was soon the envy at family gatherings and parties where she would perform the current dances and sing to popular records. It was only natural and a matter of time before she followed her dream and pursued a career in the Entertainment Industry and over the years, this dream and a determination to be a winner has led her to become an accomplished singer/song writer, model, dancer, and actor.

All in all, so far Catherine Rhodes has lived a life full of ups and downs, not unlike so many of us. With a winning smile, personality and charm to match, she continues to pursue her dream of singing for the world and if you listen real close, you can hear her story in her songs.

IF NOT NOW, WHEN?